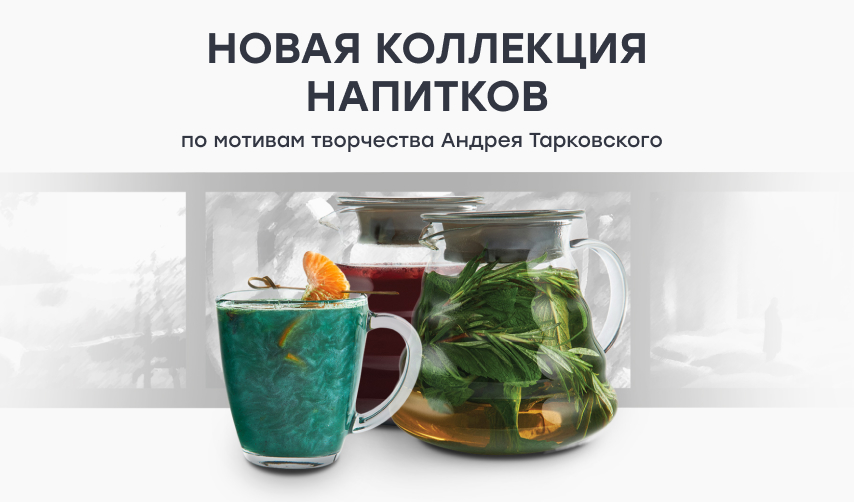 This season, the brand bar manager of the Iconfood restaurant holding, Asker Hashev, has created a unique collection of drinks based on the films of the great director Andrei Tarkovsky. Outstanding Soviet film director and screenwriter, winner of the Venice and Cannes International Festivals. Many of his works have become classics in the history of world cinema.

Let's start our film review with the film “Solaris” - the drink of the same name, dedicated to this film. This is a rich and dense mulled wine with citrus flavor and shimmer - a reference to the image “the thinking ocean.” At the time of the film's creation, there was no computer graphics. To display the image on film, Tarkovsky's team of artists worked on an amazing self-moving liquid. I studied different compositions, highlighting and coloring them to achieve the desired consistency. We recreated this effect with the help of a pastry shimmer.

“Zerckalo” is a tea with a tart and rich taste, a balanced combination of sweetness and sourness. The film “Zerckalo” is considered one of the most confusing and complex films of Andrei Tarkovsky for a reason, and his shots are more like paintings. When viewing, there is an aesthetic pleasure. The drink of the same name has a similar character: complex, but elegant, recreating the atmosphere of a green meadow and pine forest in perspective.

“Stalker" - latte with tangerine flavor and marshmallows. This drink is a reference to one of the scenes of the film: the characters get into a kind of Temple through a symbolic font. At the edge of the well, one of the main characters, a writer, utters his famous dialogue. In the drink we tried to reproduce the waves of sand on the floor of the Temple and give it a recognizable color.

“Ivanovo Detstvo” is a tart and spicy latte with a hint of apple. This drink creates an association with a scene from the movie: the dream of a scout boy, where he rides in the back of a trucks with apples that fall to the ground and horses follow this trail of apples, eating them. The drink is based on a sauce with spices and apples, decorated with an apple pattern, which very often appears in Tarkovsky's work as a symbol of biblical motifs.